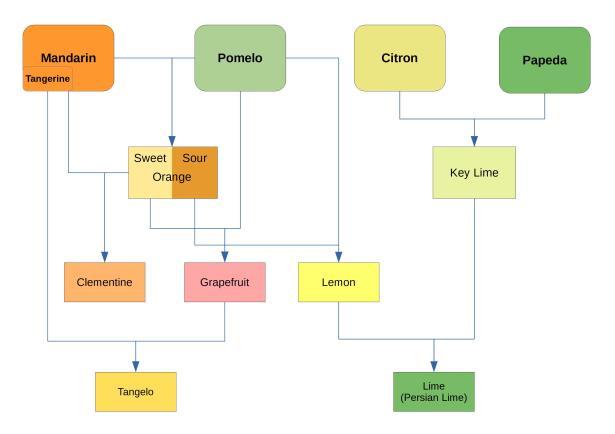 I don’t want any drama from tangerine separatists.
Even though the name tangerine was originally used for mandarins coming from Tangier, Morocco, “Genetic study has shown tangerines to be mandarin orange hybrids containing some pomelo DNA”

There was a time when I was younger when I would make bold declarations like, “I could never date someone who doesn’t read.”

My reluctance to say things like that now isn’t because of a change in my preference of who I would date, but more about the way the declaration was made. At 20 what did I know about the word ‘never’.

So I’m on this date, in the getting to know you phase, and my partner is asking all sorts of questions.

I twist a fry into the ketchup cup and put it in my mouth.
She says, “What kind of stories do you write?”

“Mostly slice of life, small interactions, that sort of thing.” I lick some ketchup from the corner of my mouth.

“Do you ever write animal stories?”

I shake my head.

She continues, speaking softly, as if to herself. “If you wrote an animal story, I would read it.”

I think, where does someone who only reads animal stories fit into this whole “never date one who doesn’t read” thing?

And how would you go about judging what category they fall into?

Later, I come up with a test.

Once upon a time, there were two cockroaches that lived in a compound, James and Cletus.
Well, there were more than two cockroaches in that house, but these are the two that we know and they were friends.
They had both lived around the same house their whole lives. Cletus was born in the dark recesses of the bedroom, hatched out of an egg cylinder behind damp clothes.
He spent most of his time darting under the bed, behind the wardrobe, eating paper and fabric. On rare occasions, a crumb would fall out of a snack plate. He would snatch that up, rubbing his forelegs together with delight.

James was born outside the house. Past the back door, along the wall where the sewer pipe enters the ground is a patch of soil that never sees any sunlight. It was in that muck that the egg cylinder that held James was laid. He emerged as a nymph under the patter of rain, scrambling, confused by the elements. All his young life, he was beaten by the sun, buffeted by the wind, swept off by the rain, until he mastered them. He saw himself as a self-made roach and did not let anyone look down on him.

The bedroom had an air conditioning unit installed in the wall. A rectangular hole held the appliance, padded on all sides with newspaper. It was in this crawlspace, one coming in and the other going out, that James and Cletus met for the first time.

Cletus had grown up indoors amidst plenty. He was non-confrontational and welcoming. James who had lived the hard scrabble life saw this, and sensing no challenge from James, approached him without aggression or ill will.
They became friends, because there was no reason for them to be enemies.

For weeks, they would meet every day in the crawlspace and decide together where to explore. They would run on the window ledge then leap in tandem, wings fluttering, slide down the curtain, canter along the wall, under the door, into the next room, nestle behind the TV stand and frolic in the warm exhaust of the electronics. If outdoors, they would dig under fallen leaves, forage in the trash bin, eyes darting, legs skittering, stumble upon a discarded meal and gorge themselves.

They would dash past other roaches, waving feelers as they ran. Stopping for breathless introductions.
“This is my friend from outside,” Cletus would say. And James, ever the clown, would do a mock bow, to show he wasn’t entirely without manners.

It was a happy life.

One day James asked, “So what’s up with you and Linda?”

They were crouched in the corner of the kitchen, pulling pieces off a lump of bread they had dragged there.

To get there, they had come through a hole in the ceiling, scrambled down the wires leading to the fuse box. Cletus leading the way, showing James the shortcuts, how to get from room to room without being seen.

Cletus pushed a crumb into his mouth, chewing on it in silence. “You know how it is. We grew up together, hatched in the same wardrobe. we pretty much live together. If I try to make a move, she just laughs like it’s a joke.”
James listened, giving Cletus time to say everything on his mind.

“It’s the closeness curse.” James said.
He thought about it for a minute.
“You know what you should do?” he said, putting his front legs on his friend’s shoulder. “You should move out. Create some distance so she sees you as an outsider.”

“I will even make it easy for you. You can move into my apartment, try it for a few weeks, and then approach her as a different person.”

So it was that Cletus moved out to live as a cockroach in the sewers and James moved into the house.
Cletus spent the first day getting used to the new place. On the second day, it rained and as the waters rose around him marooning him on the highest object in the room, he came to terms with the privilege in his life and admitted he was not cut out for this.

When the morning came around, he packed his belongings into his little hobo bag, said goodbye to the wet room, and high-stepped it out of there.

Cletus waded through the mud to the side of the house. He hauled himself up the wall of the building and climbed inside through the kitchen window.

He hadn’t even finished climbing to the ground before he saw two cockroaches cuddling in the warmth behind the freezer. He was tired and bedraggled. Cletus approached them with caution, then moving faster as he got a closer look at them. Yes, it was the only two other roaches we’ve mentioned in this story: James and Linda.

Cletus flipped out, started cursing. He went on and on spewing a creative list of B-words, like backstabber, betrayer, bastard, until he was winded.
When Cletus paused to catch his breath, James said, “I thank you not to use that type of language in front of my future wife.”

James ran towards him, antennae swinging and butted him with his head.
They wrestled, Cletus unable to hide his surprise that this was happening to him.
Cockroaches are resilient creatures. They can hold their breath for forty minutes and live without a head for up to a week. They can survive nuclear winters, feeding on ash and radioactive waste but they are undone by what might be considered a design flaw.

James went low and swept the leg. Cletus tumbled over and fell onto his back.
By evening, Cletus was still lying on his back. He was lightheaded from hunger, his legs kicking weakly. He could hear movement beyond the periphery of his vision. He tried to wiggle his body towards the source of the sound.

“Hello? James? Look, I’m sorry. Just flip me over and I will leave and not come back. Linda? Is that you, Linda?”

When she is finished reading, she does her face like the thinking emoji and asks, “What is the moral of the story?”

Location Identification Dissociation is the condition that occurs when you meet someone you’d normally know in an unfamiliar environment and are unable to recognise them. This is caused by the way the mind works, using shortcuts to quickly place faces.

When we see a close friend or family member somewhere we don’t expect them to be, our minds quickly latch on to the fact that the face is known to us, but the next step which automatically matches that face to the list of faces of people you expect to encounter in that space fails. Instead you are left with a sense of unease, that something is out of place as the brain shifts from reflex action to a more deliberate mode with you thinking through what you are seeing to infer from the face as object what person it represents.

Thus in a crowded arena where I do not expect to meet my brother, when I see him, I am conscious of my brain ponderously going through the steps.
First thinking, “that looks like me.” Not that the object is a person who looks like my brother, but rather that it is similar to me. I start with the shock that the oval mask looks like me and then wade into a muddle where I consider such unrealistic options as, it is me, is it a mirror, or someone playing a trick, before I settle into the reasonable conclusion that he only looks like me because he is my brother.

That gap of panicky time–because these situations present themselves entirely at random–is immeasurable but as I have gotten older, I am unable to shake the feeling that it is lengthening and that every time it happens it takes a little longer to arrive at a logical destination.